That time when a computer literally caught on fire! 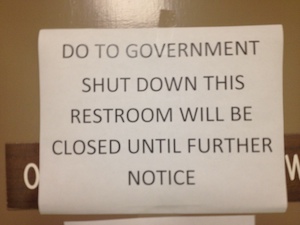 So it was during the government shutdown in October of 2013, which was an odd time.  Fortunately, I was among the lucky ones who got to work, which meant I was guaranteed to get paid, which was good since I was a contractor. The deal for government employees was actually pretty controversial. The trains were running, but on the limited ‘S’ schedule ( while my train line was, I think others ran on normal schedules ).  AWS was off, which meant I had to work an 8 hour day. With all these schedule changes, it also meant I had to go to a different Train Station in MD.   The trains were mostly empty, the City was like a ghost town. Even access to the building and restrooms was limited.

There was a scare.  Some woman had tried to drive her car into the capitol building. It ended up created a lot of chaos, and I even got stuck in a lock-down for a while. Initial reports were that there were shots fired at the Capitol. Turns out that was capitol police shooting and killing the driver of the car.

And then there was the dead server.  One morning, my counterpart and myself come in to find a server dead. Can’t ssh into it, ping it, nothing. So, we head down the computer room to have a look. Grab the crash cart, hook up a monitor and keyboard - and nothing. Black screen, and dead computer.  None of the Diag LED’s were lit up either.

So my counterpart unplugs it. He waits 10 seconds, plugs it back in. There is a faint pop and smoke starts pouring out.  He quickly pulls the plugs. And we hope it doesn’t trip the fire suppression system.  After our morning status meeting, we head back down to the computer room. We pull the server out of the rack on it’s rails, open the lid, and sure enough, there is a big burnt section of board where something had burnt out.

We managed to get replacement system board, the computer came to life, and eventually the government re-opened and everything more-or-less returned to normal.

As a side note, I once had a dream that one of the important servers at the Bank I worked at caught on fire.  It was after I’d left and the FDIC shut them down, and they had new owners. Me and my other counterpart were standing the computer room as smoke poured out of that server wondering who to tell, or if anyone even used that server anymore.  This was 3 or so years before the server really caught on fire at the government, and I think it was triggered by the FDIC’s actions. Fortunately, I had left the bank about 3 or 4 months before they were shutdown and it was just a strange dream.

SSD, LVM and you: Zero data loss, LVM caching, and properly configuring your Linux box to get the most out of SSD!
An email server in Lightsail: it’s harder than it sounds!