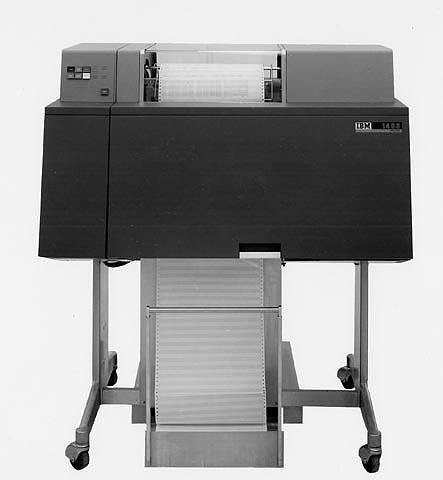 So it was late ‘95 to early ‘96, and I had just started working full-time at the printer company, with much to learn back then….

So the director of HR calls me up one morning, when I first walk in the door, to tell me her printer isn’t working.

My first thought was an issue with the print queue.  Print queue problems were rampant in the mixture of Solaris and Sun OS that was most of what was on the network.

So I check the print queue, and it seems the Sparc box lost contact with the printer sometime the night before.

This printer was an old Epson Green-bar line type printer. It had a Mylan print server that connected on one end to the parallel port on the printer, and an ethernet port on the other end. It was configured using reverse ARP, an archaic way of configuring IP devices from a UNIX command line.  So I reset that device and the printer it’s attached to.  When it comes up, I make sure it’s ethernet light’s are lit and blinking as they should be an they are.

I go over to her Sparc workstation, and I can ping it. It seems to be on the network, but lpd refuses to talk to it. WTF?????  So, not knowing where the problem is, I run the printer through a diag and self check.  It checks just fine. Then I was wondering if I could the same thing for the Mylan … So I pulled it off the printer, unplugged it’s power, and ethernet, and took it back to my desk where I pulled out the owners manual.

Upon inspecting the device itself, and looking through the dip switch settings,  i discovered that they seem to have been randomly set to a combination that would make no-sense and make the device not work right. So, I went through the set up of the switches, one at a time, going through the docs, and then took it back the HR Director’s office, plugged everything back in, and her report immediately started printing.

There were a couple of pranksters around, but NO ONE ever took credit for changing those. I have my theories, but no evidence …  And it was not my first hard lesson on the front line, nor would it be my last.

An email server in Lightsail: it’s harder than it sounds!
A Few Things To Do When First Setting Up a LightSail Instance Running Wordpress