What Really Happened at Roswell in July, 1947? 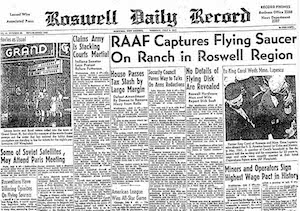 It is generally accepted that something crashed in the desert outside of Roswell NM around July 7th, 1947. My original thought was that NOTHING crashed there, But now, I think something was intentionally crashed by the air force. What I’m thinking happened was that they crashed some kind of weather balloon or some kind of simple aircraft - maybe something made to look like a flying disk. It was staged on a night when there was a thunderstorm to make it easier to fake, and cover up. Then they issued a fake press release, making wild claims. Followed with them promptly trying to cover everything up. They even went so far as to plant some fake evidence in the national archives to be uncovered more than 1/2 a century later.

Why would they go through so much effort for in the first place? Well, my guess was they want to test their ability to cover up the crash of an experimental air craft. Remember, this happened when they were doing test flights of captured V2’s after WW2, and breaking the sound barrier, and who knows what else. They knew a crash was inevitable. And they wanted to know if they could actually cover it up.

After the hysteria surrounding the War of the Worlds broadcast just a few years earlier, it seems they decided to use a UFO crash as the scenario to test. Then they wanted to see if they could make a weather balloon claim to explain it away.

What of the witnesses? Well, it’s a proven fact, that after 40 or 50 years, ones memory is going to be kinda not accurate. And since there was no REAL documentation, it’s not likely that all the witnesses were accurate. Also consider that by the time the witnesses had come forward, a lot of Sci-fi movies and conspiracy theories alike were already out there.

All I’m going to say about those two reports from Congress about Roswell is they are complete and total MALARKEY!!

So, there you have it. Simply the whole Roswell incident was just a tests too see how well the Air Force can cover up things. Considering how much ruckus has been caused by it, I don’t think I would say they were successful, unless their goal was to distract everyone from something else, which is completely possible.

Can Someone Pass the SAT, or Anyother Filling the Bubble Type Test, by Randomly Answering Each Question?